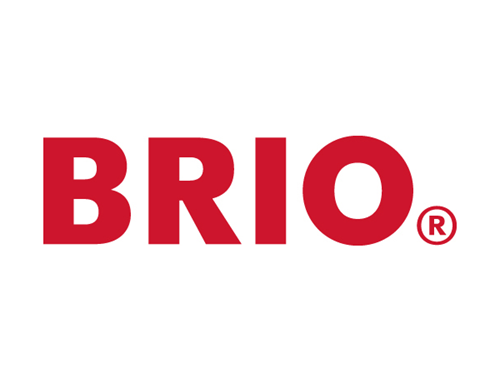 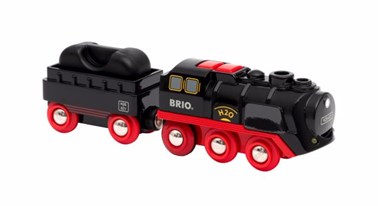 “Full steam ahead!”. Chug around your BRIO World railway with realistic steam effects in the 33884 Battery-Operated Steaming Train. This battery-powered engine produces safe-to-touch steam from its chimney as it speeds down the tracks. Once you’re out of water, you can easily refill the engine using the refill load that’s being pulled behind the train. Press the red forward button on the top of the engine, the front light switches on as the steam starts to rise and you’re off again on more classic railway adventures.
Art#: 33884 Namn: Battery-Operated Steaming Train

All aboard the battery-powered 32265 Mickey Mouse Battery Train!

Marvellous Mickey adventure: This train is ready to take everyone’s favourite Disney character on a ride around the wooden tracks as he comfortably sits in the passenger wagon. Simply push the top of the chimney to get the train rolling and when you’ve arrived at your destination, press it again to stop and let Mickey off.

Part of the BRIO railway system: Featuring iconic BRIO magnetic connections, this playful train is ready to connect to other vehicles and wagons in BRIO World and BRIO railway toys. 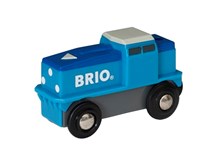 Let’s get the cargo moving with the 33130 Cargo Battery Engine. Designed with toddlers in mind, this battery-operated toy train features a simple tap and go function. Just tap the arrow on the front to start the engine off, then bring it to a stop by tapping it again. With a cool blue and white design, this cargo train is ready to pull the heaviest of loads. 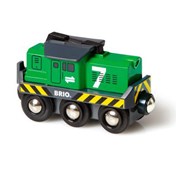 If you’re looking for a new set of wheels for your BRIO train track, you’re in the right place. This battery operated action train set is extra fun with a moving coal wagon and a rotating cement mixer as well as headlights that light up on the engine.

This modern battery operated train travels all over the BRIO train tracks. The engine driver sits comfortably in his seat ready to take passengers out on new adventures. Let the imagination set the destination. 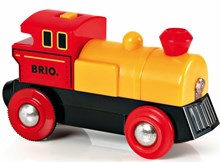 Steam up with this red, classic BRIO two way battery powered engine. The forward and reverse functions as well as headlights that light up make this a fun companion on the railway. 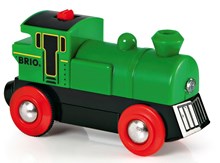 Full steam ahead with this classic, green battery powered engine. The forward and reverse functions as well as headlights that light up, makes this a must-have for any BRIO railway.

It is time for the youngest train drivers to play with a train that moves by itself. Just press the arrow button on the top and the train is on its way. Press again and the train stops. The clever connection magnets will connect with wagons in every direction, so here we go.